BACK TO NEWS ARTICLES 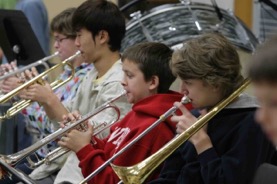 Musician John Thirkell has called on the government to support music lessons for children.Swiss IWC Replica Watches best replica watches
"Music education has been thrown to the wolves in the UK," said the trumpet player, who has worked with George Michael, Tina Turner and Bruno Mars.
His comments coincide with research published by the Musicians' Union (MU) suggesting poorer children are priced out of learning musical instruments.
Children in low income households were half as likely to take music lessons.
The report suggests only 19% of children from families earning less than £28,000 learned a musical instrument, compared with 40% of those in high-earning households.

Read more here:
Music education 'thrown to the wolves' in the UK
Calendar

NEXT EVENT
READ MORE
About